“Saint Lucia has the most beatiful beaches”, whispered a Dominican library security officer to me a little secretly, when I told him we were heading there for Christmas. Just as he was not supposed to say that out loud. Surely Dominicans are proud of their own beautiful nature island; however, whereas neighbouring Dominica has really no white sand beaches on the island, Saint Lucia has many.

Out of all the islands we visited on our 5 week Tour de Caribbean (in Dec 2016) , Saint Lucia  seemed the most developed and Western world -like. This country of 160 000 inhabitants and still a part of the British Commonwealth, independent since 19xx, has a well established national and regional system – at least so it seemed to us from “the land of systems and processes”. Official processes worked (of what we saw as tourists), it was easy to get a round, prices mostly fixed and all kinds of services and stores available. Large portion of the country’s GDP comes from tourism and services and that is quite evident. 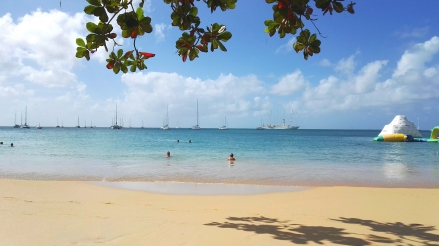 “Everybody’s in Facebook, Instagram, Snapchat… I’ll message you on WhatApp —“, I overhear a local girl saying to another  on a local minibus one day.  The same in ads – social media is largely present in commercial advertizing (throughout Caribbean, though, not just St. Lucia). 4G smart phones are common and localized ads pushed to your feed as you spot yourself on the map in posts. What did I think – that these tiny islands in the “outskirts of civilization” wouldn’t have well-established systems (talking about prejudice…)?? So, check social media for more information and pictures on the island… You’ll surely find a lot!

Tourists are treated well, since tourism is what brings money to the island. Can’t say the same about locals being genuinly friendly to tourists though. We heard only once Swedish, all others seemed to be either British or American. Sailing boats on bays had US, French, Canadian ja Brazilian flags. Big cruise ships stop by capitol Castries on their Eastern Caribbean routes. We were assumed as cruise passengers several times (though with our backpackers’ gear I wonder why…). Cruise tourists have several possibilities to explore the island for a day on organized day trips to attractions such as the famous Two Pitons (mountains) south of Castries in town of Soufriére. The town has a beautiful bay area with scenes to the Pitons, a nearby one and only drive-in volcano and sulphur springs as the island is volcanic. Furthermore, shopping possibilities are quite good for tourists as purchases can be made duty free on many malls. 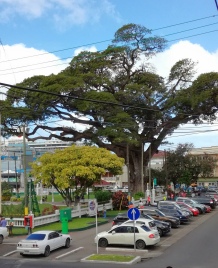 Christmas on the beach

Our main attraction was beach.  Our home for the holidays as we stayed over Christmas, was located in the very Northern part of the island on Caribbean side in an area called Rodney Bay. Our apartment was conveniently located just across the street from beautiful Reduit Beach. So conveniently that we ended up staying all six days in that area and enjoyed beach life there. We actually tried to head to Soufriére for a day trip and took a minibus to Castries. However, in Castries nor in Rodney Bay we could not withdraw any cash apparently due to shortage of notes on Christmas… and thus decided not to proceed with only little cash with us. Reduit beach, or “our beach” also featured the whole Caribbean’s “largest” water park, which we enjoyed twice. What a workout and fun it was!

mde
To us being from Finland, spending Christmas on the beach in the tropics is quite exotic. To us it seems a bit weird to see all kinds of Christmas decorations on palm trees with temperature hitting 30 degrees Celcius. And to us Christmas is usually about spending time with your family and relatives, enjoying huge traditional well-prepared meals and just taking it easy and chilling at home. Apparently to the Caribbeans, Christmas is about festivities and parties with friends and family. Children receive presents and parents party. We enjoyed a family dinner at a Nepalese restaurant (quite far from traditional Finnish Christmas meal…) and luckily got to Skype some of our close ones at home. Even Santa had visited our apartment while we were on the beach…

As all the Caribbean islands are different, so is Saint Lucia. To us it seemed most western and most expensive too. At the same time, this little country seemed to have a well-established and functioning society, which to us seemed easy. Had we had the energy to visit some of the little villages and thus seen more local way of living than what Rodney Bay and Castries had to offer, we might think a little different. But since we didn’t, the island seemed good for a beach getaway that otherwise to us seemed a bit dull among the other islands.

One thought on “Beach life in Saint Lucia”